‘lust for life’ becomes the singer’s lana-iest release yet.

Lana Del Rey might just be the world’s most unconventional pop star. In her debut album, Born To Die, Lana did what newcomers could only dream off, she established her sound, her aesthetic, and developed a rabid fan base. After repeated summers of female singers singing about love, happiness, and fun, Del Rey’s moody, often depressing façade came as a refreshing take on the current state of music. With her subsequent releases, very little changed, to the point where Lana Del Rey arguably become her own subgenre. “That’s very Lana Del Rey” is a phrase that clearly encapsulates the singer’s impact on music. With Lust For Life, her fifth studio album, Lana further reinforces her unique brand, while creating magic reminiscent of her luscious beginning.

Right out of the gate, what set Lana Del Rey apart as an artist, was her commitment to bring a cinematic nostalgia tingled with her own inner struggles and themes. The singer showed a fascination with the romanticism of death, faded Hollywood glamour, unconventional, often tragic relationships, and old-school Americana. And, admirably, she stays loyal to those themes today, while acknowledging the new and different struggles that came from her lifestyle change. Lust For Life instantly became my second favorite Lana Del Rey album after the dark, majestic opus Ultraviolence. What made this album so winning for me, was her undisputed ability to add relevancy to her record while still maintaining her soul.

Working with bonafied hitmakers Benny Blanco and Max Martin as well as having multiple collaborations (The Weeknd, A$AP Rocky, Playboi Carti, Stevie Nicks, and Sean Ono Lennon) seemed like troublesome signs for the singer’s newest release. Adding to that, the lukewarm reception to her last album, the good-enough Honeymoon, I was not expecting a lot from this release. My concerns were quickly shut down with the release of her first single, the opulent Love. With a production that felt equal parts cinematic and poetic, the release showed that the singer was still far from becoming a product, but rather, showed her views toward the future through her rose-tinted glasses.

Other standouts included the title track Lust For Life which felt like a fresh, direct sequel to Love. Featuring a collaboration from The Weeknd, the song beamed with chemistry and romantic freedom while still maintaining a throwback vibe. 13 Beaches shows a vulnerable side to the artist where she confesses that she’s been “dying for something real.” In Cherry, she offers several clever metaphors to explain her feelings towards her lover. It feels like rather than choosing standouts, I’m going through the tracklist, but the first act of the album is magnificent. White Mustang feels like an incredibly personal track about infatuation perfectly laced with infectious trap sounds. Summer Bummer and Groupie Love are probably the singer’s most mainstream efforts yet and its not due to the A$AP collaborations. The themes and production values make both songs sound radio-friendly, yet still on brand with Del Rey. In When The World Was At War We Kept Dancing she asks, “is it the end of an era? is it the end of America?” before reassuring that a happy ending is on the horizon, a theme that seems particularly current to the state of politics today. The collaboration with Stevie Nicks comes in the slightly self-deprecating track Beautiful People, Beautiful Problems. The collaboration feels like a match made in heaven, although, slightly underwhelming (only due to personal sky-high expectations). The closing track Get Free, undoubtedly sounds like Radiohead’s Creep in nature. Once you get over the initial, and probably unintentional coincidence, the song may serve as a hint of what’s next for the artist. When she exclaims her desire to “get out of the black and into the blue” and professing her “modern manifesto, doing it for all who never got the chance,” the singer shades a lighter path, a still unexplored new theme for her music. Hope.

Listening to the album made me appreciate how perfect the album cover is. That booming smile and flower-ridden hair, represent more than a cute Instagram post. They metaphorically exclaim that the singer is in a different place in her life. While that place isn’t probably full of rainbows and smiles, Lana may be finally allowing light in, after so purposefully trying to swim in darkness. One of the best releases of the year, Lust For Life is her Lana-iest release ever, and that is a wonderful thing. 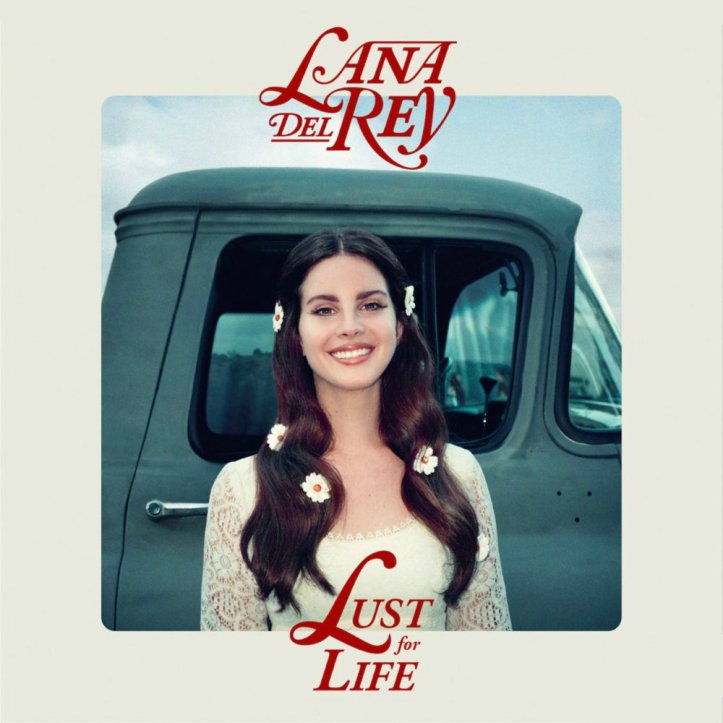